A high powered government delegation headed by the Minister of Finance and Planning, Hon. Salvatore Garang Mabiordit and the Central Bank of South Sudan signed bilateral and multilateral agreements with international partners in Washington DC.

The delegation arrived in USA on April 7th, 2019 for the Spring Meetings of the International Monetary Fund and the World Bank. 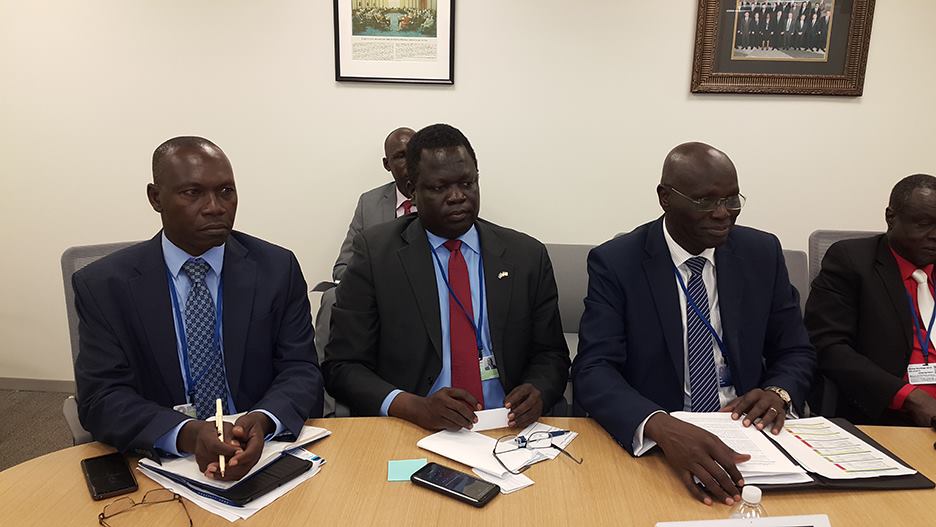 The delegation then had bilateral meetings with senior officials from the US – State Department and USAID, as well as representatives of other countries to the

International Monetary Fund and World Bank such as Ms. Anne Kabagambe, who is the Executive Director, Africa Group 1, World Bank Group, amongst others.

The delegation briefed the IMF, the WBG and State Department representatives on the current status of South Sudanese economy and the process of the Revitalized Peace Agreement including the economic reform agenda, which is now a top priority for the Transitional Government of National Unity (TGoNU), the humanitarian situation in the country and the urgent need to reactivate and where possible, initiate developmental projects in the country since there is peace in the country.

While acknowledging the challenges facing South Sudan, the IMF and the WGB appreciated the economic measures and reform programs currently being pursued by the Ministry of Finance and Planning and the Bank of South Sudan.

The two institutions further expressed their commitment to continue to provide technical assistance to enable Finance Ministry and the Bank of South Sudan to deliver their reform agenda.

JICA has been supporting growing projects in South Sudan before the independence of the country in 2011. It has been working in partnerships with the Government of South Sudan for the realization of peace and development of the country. It has also actively promoted inclusive and dynamic development for unity. Currently JICA is implementing its four focused areas programs in South Sudan which includes “improvement of the economy through basic and social infrastructure, development of alternative industries, improvement of basic living and livelihood conditions and strengthening governance and security”.

JICA projects in South Sudan include; the construction of freedom bridge, improvement of Juba water supply system, management and capacity enhancement phase 2 amongst others.

The spring meetings of the World Bank Group and the International Monetary Fund each year bring together central bankers, ministers of finance and development, private sector executives, and academics to discuss issues of global concern, including the world economic outlook, poverty eradication, economic development, and aid effectiveness.

Also featured are seminars, regional briefings, press conferences, and many other events focused on the global economy, international development, and the world’s financial system. This year’s Spring Meetings events took place in Washington, DC, from April 17-23, 2019.