Central bank’s Governor Hon. Dier Tong and the accompanying delegation arrived Yei branch BSS on an inspection visit lasting several hours. The team including the Director General for Finance and Administration, Yeni Samuel, Deputy Director for Support and Services Mabior Achuang and Dina Andrea coordinator of branch affairs met the staff of the branch, who welcome the delegation singing with enthusiasm.

In a meeting with the branch manager and later with the staff, the Governor listened to challenges facing the staff at Yei branch, and the difficulties facing the bank in general.

Mr. Andrew thanked the Governor and the accompanying delegation and said “it raises our morale” as this signals that we are recognized by the headquarters. He then proceeded to outline the challenges facing the branch in the context of the recent transfers which affected the branch negatively. He said, now there is lack of one head cashier for both receiving and payment.

He said that now the branch also lacked one accountant, 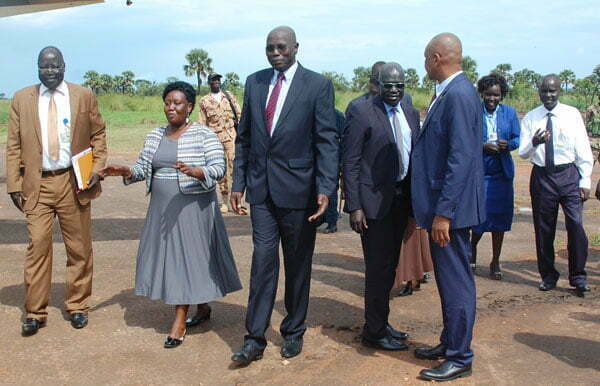 The Governor said that the main objective of the visit which is actually the first in a series of visits to branches is to create awareness about the direction the leadership which he represents will be taking on the new vision, mission and core values of the bank.

“I have never seen Yei, this is my first time here,” he said. “I was supposed to have come here since May when we took over, but due to competing priorities, it was not possible. But better late than never.”

The Governor then said the strategic plan which was launched in mid-March this year is now the guiding document. “There are things which require our team spirit to accomplish, but there are also things we have acted on now. We have developed job descriptions. This is being cascaded to the level of staff, so that you know what you are supposed to do, or what the institution expects of you.” “Every year, you will have to sign a plan after which you will be evaluated based on your job description in six months.

“We are established by the bank act 2011, with the mandate of price and financial system stability,” he said.

“We are an institution which is governed by law, rules, regulations and policies.”  “If there are deficiencies in those rules, then there will be a forum where it can be addressed,” he said.

As regards to some of the points raised about the issue of transfers, the Governor related his experience working with the Central of Sudan, saying that transfers always evoke some disagreements, which he said is understandable. Prior to the transfers, the Governor said, “We consulted with those to be transferred; however we don’t consult with staff on departmental transfers.”

On the issue of accommodation of staff, the Governor threw a question as to whether or not it is possible that a house be rented inside Yei town as a short term measure. The long term measure would be to purchase land for the institution and to build on it.

On the other hand the Governor said, “Our role as central bank centers on the price and financial sector stability and not to pay government salaries.” “The latter is the function of the ministry of finance.”

The Governor cannot work in isolation, he said. Team work is very essential. In the bank all are important, from the sorter to the top management; all must work as a team.

When we took over, we cancelled all dollar approvals to individuals, he said. “When you give 100,000 dollars to an individual, he said, you make him a millionaires, because he goes and sells it in the black market.”

However the Governor said, this time round we have decided to channel the little dollars we have to strategic commodities, fuel, food amongst others to achieve price stability. This is because fuel is linked to many other things. Now in Juba, the price of fuel has fallen by significant margin. One litter is selling for 180 SSP in the market as opposed to 375 SSP in Yei.

On the challenges facing the branch, the Director General for Administration and Finance Yeni Samuel said that all the issues raised would be attended to; given that they must be budgeted for. The issues included but not limited to the purchase of new vehicles for the branch, radio gadgets for the security amongst others.

Other administrative matters addressed positively by the DG included the issues of accommodation for staff, medical and ordinary tickets, promotions, capacity building for staff, Cisco phone distribution, old counting machines, car purchase for the branch, solar power to connect branches at night as a remedy for fuel powered generators, and local hiring of staff to close existing gaps.

On the other hand the Yei river state minister of finance Lona Sadia Anthony, who attended the meeting within the BSS, said that she appreciated the visit of the BSS delegation to her state, and then the Governor for the opportunity to share some thoughts.

The minister said Yei river state has changed a lot in the last three years, given the backdrop of the conflict happened. However she said that life is slowly returning to normal, as people return to their settlements. Roads are also opening to rural areas and businesses are slowly picking up again.

She said, government fuel station is currently redundant so any support to the state would help in stabilizing prices in the state.

She revealed that many graduates are currently redundant as a result of the conflict, but should the bank embark on local recruitment, it would be encouraging.

The BSS Governor promised to support the state government.

In his concluding remarks, the Governor implored the staff to work as professional regardless of tribes and gave two months gross salaries to be paid to the staff of the branch